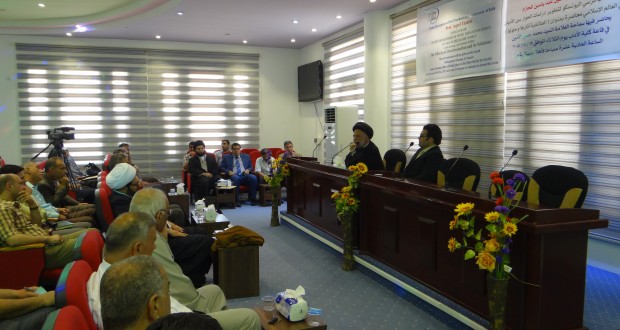 The UNESCO Chair for the Development of Inter-Religious Dialogue Studies in the Islamic World at the University of Kufa organized a symposium on the theme of Sectarianism- It’s Effects and Solutions on the 19th May, 2015. The symposium was presented by Dr. Mohammed Hassan Al Ameen, a scholar from Lebanon. It dealt with the concept of sectarianism, it’s historical roots and the it’s formation reasons. It aimed at establishing an understanding of religions on the freedom of humans which is the central concept on which social relations based. Furthermore, the symposium mentioned the notion of separating the religion and the state. The idea is that religions are holy atmospheres, beliefs, and feelings that let people to be linked to their God. Whereas the state is a contrast between individuals in a community and those lead civil institutions. The symposium has concluded that civil state is able to secure the individuals freedom and their beliefs far away from limited impressions created by wrong understanding for religions.